This is going to be a rather long post!

The generator in question is a 110Kva unit purchased secondhand with only 36 hours on it. Once we had gone over the mechanical side, I decided to give it a test run in manual mode. This is where the fun started. The engine cranked but would not start. I re-checked the fluids and any other obvious mechanical issues first. All good on that side. Now it was time to establish the cause which turned out to be heaps of fun doing it without any manuals or wiring diagrams.

While the engine cranked, the fuel solenoid did not energise. Now this may seem an easy fix, but I needed to know what provides the signal for it to energise. The solenoid has two “coils” to it – Pull and Hold. This means that the pull needs to be energised and the hold will then keep it open while the engine is running. Great, now why does it not energise? This is where it started getting interesting. I traced the wiring back to the controller and made up my own drawing for it. 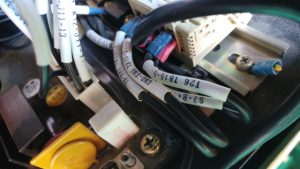 From this, I established wire number T26 TB15-5 needed power to activate the solenoid. The question was – why does it not have power to it? There was a timer installed that has the power to the solenoid (pull) through a normally closed contact. This means that it should provide power untill the timer times out at which point power will be removed from the “pull” and the “hold” should keep the solenoid open. This timer was set at around 0.2 seconds which seemed a bit too quick, but I left it there until I completed my testing of the circuit.

The connecting plug had obviously been broken at some stage and the Tech who fixed it used two insulated push-on terminals instead. These were jammed in to the male side of the original plug. I unplugged this and tested again. I now had voltage on the pull side which meant it should have energised the solenoid. Carefully checked the solenoid connector and there was the issue. The two push-on lugs were that tight fitting into the plug that it stayed in position, but the male pin from the solenoid was pushed up and there was no connection made. Repaired this and got them connected securely.

Time to start the engine! Started it in manual and it ran perfectly – problem solved.

Maybe I should thank the two Cummins Dealers whom I tried to approach for manuals and/or possible assistance with the fault (I thought this may save time) The first one asked for the information on email, which was sent, then decided it was easier to just not reply – the other wanted photos and then decided not to respond. Great help from them both.